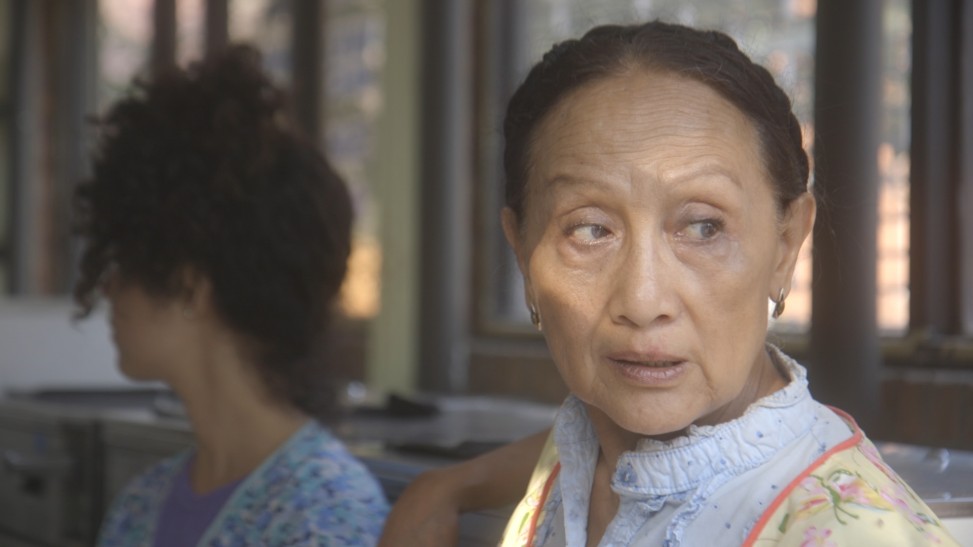 Pixel Magazine “The Peculiar Intimacy of a NYC Laundromat”

The Peculiar Intimacy of a NYC Laundromat

When it was a reading series staged in laundromats around the country, The New Yorker described “Every Fold Matters” as a “collaborative, site-specific performance exploring the strange intimacy of the everyday ritual.” The series used performers to act out themes of gendered work, gentrification, and the intermittent weirdness of city life. Playwright and director Lizzie Olesker and filmmaker Lynne Sachs are reuniting to turn the live performance into a film. For Polarr, Emily von Hoffmann spoke with them to find out more.

Emily von Hoffmann: How did the live performance of ‘Every Fold Matters’ evolve into the idea for this film?

Lizzie Olesker & Lynne Sachs: When we began our site-specific collaboration EVERY FOLD MATTERS, we knew that we wanted to incorporate moments of film into the live performances. The text for the piece was developed through conversations with laundromat workers in different neighborhoods of NYC. This was a challenging process as people were often reluctant to speak about their experiences for fear of repercussions, language barriers, etc. We did shoot one conversation with a laundromat owner in Manhattan’s Chinatown.

This filmed segment opened our performance at New Lucky Laundromat in Brooklyn and we felt it expressed something texturally and conceptually revealing. We also filmed some of the actors’ monologues and found these to have a particular intimacy reflecting the subject of laundry and caring for other people’s clothes. During the run of the performances, we decided that we’d like to adapt the entire piece to film, taking the material we’d developed in a different direction. We adapted the text into a shooting script and spent time thinking about new images and ways of exploring the physical space of a working laundromat for film.

EvH: You became interested in a particular laundromat because of its unique neighborhood & demographics. Can you describe the laundromat from the film, and what is special about it?

LO & LS: Super Suds Laundromat is located in Boerum Hill very close to where we both have lived for many years. On the corner of Nevins and Bergen streets, it is an urban crossroads between different Brooklyn neighborhoods where people of varied backgrounds and economic classes come together to do their wash. In an area that is rapidly changing and becoming further gentrified, Super Suds is one of the few laundromats left.

Ironically, another larger laundromat where we did an early performance ofEVERY FOLD MATTERS has since closed, to make way for a high-rise apartment building/development. Super Suds is warm, bustling, with typical waves of hectic energy followed by a quiet sense of calm.

When we approached Super Suds about shooting our film there, the owner was very excited and supportive about bringing cultural work into his laundromat.

EvH: This could be a story about gentrification (as laundromats dwindle in number), gendered work and invisible workers, the periodic strangeness of life in New York, or the taboo of airing one’s actual dirty laundry in public. The laundry workers perform a private task in a public space, and therefore are allowed to observe private details of their customers’ lives. Because of this, it seems like you decided to frame this story primarily as one about intimacy. Would you say that’s accurate, and can you elaborate more on how these themes will manifest in the film?

LO & LS: Clearly you are really connecting to the core of what we are trying to do. The array of quotidian experiences that each of us has as city dwellers is astonishing. Restaurant customers walk into French bistros or Japanese sushi bars and expect to be transported by the tastes of the food, the unfamiliar music and the exotic objects on the walls.

But still, there remains a quality of distance between the cook and the person who eats her food. In a nail salon, a woman bows down to color and file her customer’s toes. These experiences are an inherent aspect of the social contract that structures city life. In a laundromat, there is also a very specific and precise closeness that develops. When you bring your shirts and pants to the store to have them cleaned by someone, you are literally sharing your “dirty secrets.”

The fabric is like a new epidermal layer that connects you to a total stranger who becomes responsible for this extension of your body. We are trying to convey something about this link between total strangers through the abstracted textures, the choreographed movements and, of course, the texts of “Every Fold Matters.”

Our research for the original performance and now the film, began with a year long series of informal interviews with Spanish, Chinese (we worked with a wonderful translator) and sometimes English speaking workers in laundries in Brooklyn and Manhattan. This immersive documentary-style engagement also revealed to us how precarious this service industry has really become. Several of the stores where we have performed our piece have closed — to be replaced by more lucrative, less personal apartment buildings or businesses.

EvH: You describe this as a hybrid work of experimental cinema that combines narrative and documentary elements. What does that mean exactly?

LO & LS: There are so many ways that EVERY FOLD MATTERS is creating really interesting artistic convergences and clashes. Lizzie’s background is in playwriting and live performance. Lynne’s is in experimental and documentary film. By making a “hybrid” work, we are not expecting to concoct the proverbial “melting pot” of these distinct sensibilities, but rather to build a discursive, charged confrontation of the real and fictional, the abstract and the natural. We want our audience to be aware of the collage nature of the piece. We love the performative monologues of David and Albert Maysles’ classic documentary “Grey Gardens”, but we are also very inspired by the inventive austerity of Andy Warhol or Chantal Ackerman.

EvH: Can you share some of your inspirations, for this project or in general, of any medium?

LO: I was very inspired by Lynne’s project YOUR DAY IS MY NIGHT. I loved the way she handled the performance aspect of it — there was a beautiful, simple directness and richly specific sense of detail in its form and content. The visual artist Anne Mourier has done amazing work involving laundry- her work has definitely inspired me. I’m on Book 3 of Elena Ferrante’s Neapolitan novels, and have recently read her other fiction. I greatly admire her fearless, passionate writing and way of dealing with the often unrecognized details of her female characters’ lives.

LS: When we were looking for performers to be in EVERY FOLD MATTERS, I was able to see Jasmine Holloway sing in Soho Rep’s GENERATIONS, which transformed the entire theater into a South African village, including the seats of the audience. This immersive connection between the performance and the viewing of it was extraordinary. Tony Torn’s bawdy yet vulnerable interpretation of Pere Ubu in UBU ROI in a Downtown cabaret was one of the most daring performances I have ever seen. We invited both of these actors to be in our live performance and now our film. In addition to becoming cast members, they have also contributed two of the most important personal stories of our piece. This integrated way of working is critical to the EVERY FOLD MATTERS process.

EvH: Can you describe whether and how the themes in this work complement or depart from your previous work? When did you become interested in these themes?

LS: As an experimental documentary filmmaker, I have been fascinated by the way that people perform their lives. In 2013, I worked with Chinese immigrants who live or have lived in “shift bed houses” in Chinatown to make YOUR DAY IS MY NIGHT a series of live performances and then a film which I premiered at the Museum of Moderns Art and then screened in the US and abroad. We collaborated on a live performance that brought stories from their lives into a space where they were able to reveal and invent. I relish the moment when my “subjects” become collaborators, bringing their own sense of play to the project. I think EVERY FOLD MATTERS pushes this creative exploration even further. Lizzie has an uncanny way of listening to conversation and turning it into poetry.

LO: In my previous works for theater, I’ve wanted to open up the experience of invisibility, particularly as it relates to domestic labor. I often use historical and contemporary research about work issues to inspire characters, images and stories. My most recent play, EMBROIDERED PAST was about a family who obsessively keeps things. It began by looking at the way objects can function in our lives, leading to a kind of everyday, ordinary hoarding. Caretaking, another “invisible” form of work, is a theme I investigate through drama. This all seems related to laundry and the way we must find ways of caring for the things we keep closest to our bodies.

Interview by Emily von Hoffmann and Polarr — Pro Photo Editor Made for Everyone. Follow Polarr on Twitter and try our products.